I’m going to admit to a little secret. Up until very recently, I had never seen Friday the 13th. I made the mistake of admitting this on the actual Friday the 13th, prompting this exchange: 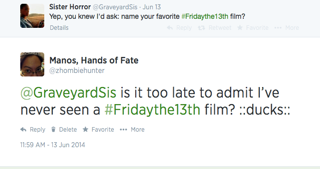 So, having to earn a bit of my horror cred back, I dropped a couple of bucks to rent it on Amazon. I had a vague idea of the story: camp counselors get picked off one by one by a mysterious killer. Thanks to playing the Friday the 13th Nintendo game (not owned by me, but a friend of mine—my parents took video game content as seriously as they did movie ratings), I knew that the killer wasn’t Jason, but his mother.

Armed with this knowledge, I was afraid I wasn’t going to enjoy the movie as much. I can only imagine sitting in a darkened theater in 1980 when the killer was revealed—not a big, hulking man, but a middle-aged woman, a mother. That was probably akin to watching The Empire Strikes Back and learning for the first time that Darth Vader was Luke’s father.

I was happy to discover that the movie held up, even with spoilers. I love the look of horror movies from the late 70s/early 80s. Also typical for movies from that era, the teenagers themselves weren’t very distinguishable from one another, which is fine for a movie like this. They served their purpose in getting killed in inventive ways; giving them personalities would just complicate matters.

Alice as the Final Girl surprised me a bit. I was expecting Annie, who was the first camp worker we see and then see killed, to survive until the end. She seemed very friendly and wholesome, traits that many later Final Girls would have in the genre. Alice, though no less friendly or wholesome-looking, was sleeping with Steve, the camp owner.

She also indulged in a little weed smoking and strip Monopoly with Bill and Brenda. All of those vices should have been enough for Alice to get the axe from Pamela Voorhees, but instead it’s Alice who gives Pamela the axe. To the neck. But Alice was one of the first in a line of Final Girls so the mold hadn’t quite been made yet.

I can’t wrap this up without mentioning my favorite character: Crazy Ralph.

With his little blue bike and sneaky way of popping up when you least expect him, Crazy Ralph played the typical Cassandra role in portending doom with no one believing him. I’m not sure if he was meant to be comic relief, but I laughed when he told Annie Camp Crystal Lake had a death curse and Enos tried to shoo Crazy Ralph away like a dog. Crazy Ralph was such a menace that even the local police had to track him down and keep him away from the public. He showed up later at the camp, claiming to be a messenger from God and scaring the bejeezus out of Alice. He was shooed away once more, never to be seen again, at least until Friday the 13th Part 2
I enjoyed this movie so much, I bought the DVD on Amazon. It’s a definite re-watch in my book. I’m not sure why it took me so long to see Friday the 13th; I’m sorry I didn’t see it sooner. I plan on seeing the sequels, although I know they are of varying quality.
Jamelle Shannon is an avid horror fan who believes Vincent Price should have been cast in everything ever made. She blogs about horror and the mundane at A Zombie Hunter in the Desert. You can find her on Twitter as (@mellemelles)
Labels: Black Women Horror Fans Friday the 13th Movie Reviews