April 21, 2015
Sometimes, the best way to break the ice with a stranger is to talk horror movies. Which is half-true for the budding friendship me and Latanya share. After meeting for the first time last October, we were already all too familiar with each other on social media. But the first words we spoke to each other face-to-face, literally, was a debate about Annabelle...

Latanya Rene Barrett is the owner of Sprinkles and Booze, a lifestyle blog that shouts whimsical with a healthy promotion of self love, nerd culture, and very bright, shiny objects that Latanya is a pro at capturing. 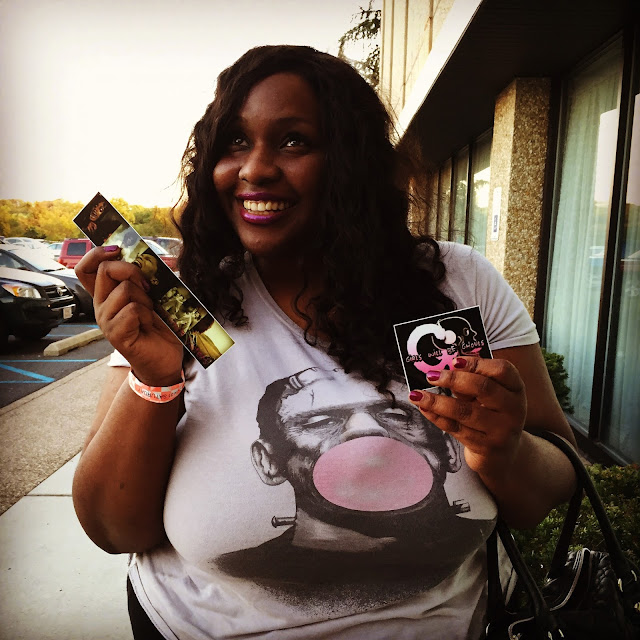 I'm pretty sure it's because we happen to be horror kindred spirits, but one of the first things you'll learn about her is that she is one of the most fervent horror fans I've ever met! Unapologetic and proud, Latanya is the talkative yin to my more reserved yang so I thought it only inevitable that I play a horror exercise with her of sorts to pick her brain about some of her "favorite's" in the genre.

With an additional Latanya shout out to Jennifer's Body as one of her contentious horror thumbs up. I told you she was unapologetic...

Latanya: I don't know if May counts but if it doesn't count than Child's Play. I actually love most things that involve Chucky.

Ashlee: May counts! It was a big part of her character, wasn't it? I didn't like that movie...


Latanya: Hm.  Man, this is actually a hard one. Are demons different from ghosts? I think they are right?


Ashlee: Very different: ghosts were once people on the planet, demons were neither.


Latanya: Damn it, it's hard to pick but I think I am going to go with The Conjuring. That's a ghost movie right?

Latanya: It's hard to determine what's a ghost and what's a demon sometimes in horror because "ghosts" are considered demonic in a sense in horror movies.


Ashlee: You think so? Evil vs. demonic but I may be just stuck on semantics.


Latanya: Yeah. I mean in the real world, because I believe they exist, a demon is way different from a ghost but in horror they sorta blend them together a lot. Like a supernatural ghost story can quickly become a movie about a demon. OH WAIT! I really loved Ju-on as well. And The Ring...if those are ghost movies.


Ashlee: Interesting. I never thought of a blend. Maybe they "turn" into one but, more like evil ghosts.
Favorite horror film with witches:

Latanya: Yeah, they like to do demon ghost remixes in horror movies. My favorite movie with witches is another hard one because frankly I am obsessed with anything involving witches. I will go with The Craft forever! For extra credit because it's my favorite movie of all time Rosemary's Baby. There were totally witches in that movie.

Ashlee: Yeah, they were! Creepy ass witches too...

Latanya: I love that movie. I watch it at least once a month like a crazy person.

Ashlee: Rosemary's Baby was too traumatizing for me to watch more than once. I'm good.


Latanya: HAHA! It's been my favorite movie since I was 3 years old. My mom said she used to put it on to calm me down when I was all hyper and running around like crazy and I would sit and watch it from start to finish.

Ashlee: That's... different, haha! That movie just punches you in the face psychologically. When I was that young, it was slashers for me. Now here's a trip up - Favorite horror film with demons:

Latanya: Holy shit. Um... Hellraiser. That was painful. I had my boyfriend help me.

Latanya: I told him what we talked about thus far and how horror does ghost demon remixes. Hellraiser was another childhood favorite. HAHA!

Ashlee: Yeah, good point! You're right about that one. It was a childhood fave for me too. I didn't realize how odd this one was until now but - Favorite horror film with mirrors:

Latanya: Lord! I am actually afraid of mirrors at night in real life.

Ashlee: I just watched Paranormal Activity 3 last night and it was basically a reminder of why I feel the same way.

Latanya: HAHA! So you're referring to horror film that has a creepy mirror scene or a horror film about mirrors?

Ashlee: Either because I know how obscure this question is...


Latanya: Though the movie was complete shit, Poltergeist 3 has a super creepy mirror scene.

Ashlee: Maaaaan, I LOVE THAT MOVIE! When I was a kid, my mom had it on VHS and I watched it all the damn time!

Latanya: I LOVED the first two and think I liked the third one as a child but when I watched it as an adult I was like, "What is this shit?!" Why the hell did our parents raise us on horror?

Ashlee: LOL! There's a nostalgia attached to it for me now. My mom was never a big horror fan, she just enjoyed watching movies and TV.

Latanya: Yeah, it didn't have that for me. HAHA!


Latanya: Does Snakes On A Plane count? HAHA!

Latanya: Because that's my answer!

Ashlee: Well, it's your answer so I accept it. Favorite horror film with aliens:

Latanya: I am afraid of ALL alien movies. Like, legit. Fire in the Sky.  I remember staying up for at least two nights in a row as a child because of that movie.

Ashlee: Yeah, the previews alone freaked me out when I was a kid too. They're not so scary anymore. But I have my horror crutches too.

Latanya: Alien anything fucks me up for some reason. Aliens are terrifying.

Latanya: A Nightmare on Elm Street for life!

Ashlee: Yaaaay! Even the "bad" ones?

Latanya: Yes. I am into Freddy like always. Same thing with Chucky which is my second favorite franchise.

Latanya: Ash...duh! My second would be the chick from You're Next!

Ashlee: A lot of people are putting her on their list. I think I hated the movie so much that I'm pretty lukewarm about her. And I actually like her!

Latanya: She is so dope. Like, so so dope.

Latanya: The dude from Jeepers Creepers. I don't know what his name is or what he is. But he brings me joy.

Ashlee: What is that thing?!

Ashlee: And I'm gonna pick on you and say, I'm telling you to pick favorites and you don't know some of their names.

Latanya: HAHA! I don't know that creature's name! Do you? I don't even know what it is! HAHA!

Ashlee: I've never really sat all the way through that movie.

Latanya: I love both of them. They are so ridiculous and wonderful. Wait! I have a different answer. For the villain. There is a British film from the 70s called Girly. The main character is "Girly" and probably legit my favorite villain ever. I love that movie dearly. And then you can put that bat creature thing if you want a second one.

Latanya: It's pretty fantastic but I love 70s horror AND British things so there is that.

Latanya: Shaun of the Dead.

Ashlee: I was kinda expecting that.

Latanya: I just had to think about this long and hard. The scene that has stuck with me out of a lot of scenes of horror that I have seen is the babysitter/sheet scene in Paranormal Activity 3.

Latanya: Alright...I think I am going to go with the photographer in the original The Omen movie. BUT I love all of the Final Destination movies for all of their ridiculous kills. I watch them only for that purpose.

Ashlee: I agree. That one blew me away when I first saw it too. Favorite horror TV show:

Latanya: Does it really only have to be one?! Haha! The Twilight Zone.

Ashlee: Favorite horror collectable you own:

Latanya: I got a postcard while in London of  a still of Linda Blair all possessed out in The Exorcist. Years after that, I met her in MA and got it signed. That was super tough. You're askin' some good one girls.

Ashlee: Aw, I love that.

Latanya: Yeah, I own a lot of stuff tho. When I told my boyfriend what you asked me he cackled. HAHA!

Ashlee: Ha! That's good to hear. Horror film that you hate but everyone else loves:

Latanya: The Serpent and the Rainbow. Which is funny because we talked about it earlier.

Ashlee: Horror film that you love but everyone else hates:

Latanya: Oh God! There is a lot of them.

Ashlee: This should be interesting...

Ashlee: *facepalm* Moving on... Horror film character that you hate but everyone else loves:

Ashlee: Horror film character that you love but everyone else hates:

Ashlee: Yeah, because no one knows what it is!

Popular posts from this blog

July 16, 2019
By Mary Kay McBrayer ( @mkmcbrayer ) For a film that could have been easily white-washed, Ari Aster’s Midsommar does have an inclusive cast. Before our characters are even taken to Sweden where most of the film's dread fueled action takes place, we meet them in their college town. Dani (Florence Pugh) stresses about her sister’s scary email while her boyfriend, Christian (Jack Reynor) drinks at a bar with his buddies, only one of whom is black named Josh ( The Good Place 's William Jackson Harper). I have watched enough horror movies to know—and I’ve been brown enough long enough to know—that this setting does not bode well for a person of color. The token minority, say it with me, tends to die first. Because of this ratio, I expected a few other established tropes of the horror genre in Josh’s character, too, and I have to admit, I was delighted and surprised that nothing played out the way I expected.
Read More

June 04, 2020
Black horror. An entity of its own, mattering the pulse of the film industry specific for this conversation, is undeniably revolutionary. Its launching pad for the world, where more eyes are fixated on it now more than ever is  Get Out  (2017). A film that has shattered records financially, critically, and further,  in prestigious recognition  and beyond, writer Dianca London reminds us that writer/director Jordan Peele created a film that flawlessly "tears the veil between the reality of blackness and how it is imagined through the gaze of whiteness."  Get Out , a black horror film is a worldwide success that refuses the white gaze by not only centering its Black protagonist Chris (Daniel Kaluuya), but canonizing him as an example of black survival in confronting a white supremacist society.
Read More