From the prolific dome of actor, artist, and writer Tarik Davis (@tarikrdavis), Addison Hadley is the "scribe of the terrifying and macabre" all the strange kids should grow up watching and the weirder adults would naturally embrace. Addison (performed by Davis) made his debut in Ego Trippin', the NYC monologue and comedy showcase developed by LeMar McLean. Since, the astoundingly handsome, grim soothsayer resides in a budding YouTube series.

Addison Hadley brings to mind Vincent Price with a sharp delivery that is both chuckle inducing and reflective. Much of Tarik's passion for genre work lies in his ability to make stark commentary on our collective and personal fears within the intersection of race, gender, and class. Tarik as Addison, describes unsavory yet seemingly mundane everyday instances and uses verbiage in such a manner that seals you within its classic gothic horror container.


"Smile No More" deals with street harassment and the toll in takes on its recipients. The horror of unsolicited and unwanted attention from strangers that alters the way women navigate their paths and behavior to maintain some semblance of safety is real. And Addison doesn't let these men off the hook either.

"Beastly Sounds" effortlessly captures the anxiety of being the racial Other in a racially homogeneous space. Reality becomes a funhouse mirror as thoughts of the consequences of this circumstance overwhelm Addison's protagonist yet, even while dished straight, brings the humor in a way which it gets funnier on repeated viewings.
I'm going to enjoy seeing what other tales Addision will pull from his vault! 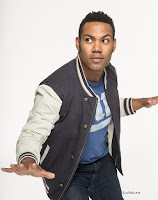 Learn more about Tarik and his commitment to the arts here.