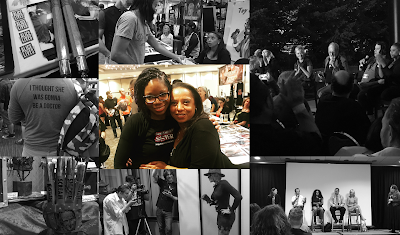 August 4th through the 6th in a little area just outside of Chicago called Rosemont saw a small herd of jazzed-up horror fans congregate in a Crowne Plaza hotel to celebrate the annual Flashback Weekend horror convention. This weekend was particularly special for A Nightmare On Elm Street franchise fans for a multitude of reasons. A head-spinning blend of cast members from many of the films, most notably Part 4, were the headlining guests with Robert Englund (Freddy Krueger) as the gracious top bill. In addition, a special larger than life documentary was being filmed titled FredHeads.

FredHeads is a documentary about the fandom of a Nightmare on Elm Street and how it has changed the lives of so many people. The documentary will follow 3 fans as they tell their story and what their journey in the Nightmare community has been; some as fans, others rising through popularity. Along the way, we will be filming at conventions and getting as many fan stories as possible to feature as many fans as we can in the documentary. It’s about the heart and soul of horror, and what Nightmare means to people and why it is not a typical slasher film. (Facebook, Twitter)

This combination made my Flashback Weekend experience one of the most exciting, emotional, and best conventions that I have ever attended. And I almost didn't make it.

FredHeads producer and media director Diandra Lazor, an online buddy brought it to my attention that the character I've been calling my twin for over twenty years now and the woman who portrayed her, Toy Newkirk (Sheila from Nightmare 4: The Dream Master) was a late guest announcement. It was close to the date and I usually like planning any travel that involves flying a bit in advance commonly because being an artist, my budget is always a squeeze. But the opportunity of finally meeting Toy was a chance that I would never internally stop screaming at myself for if I didn't book it. I through caution to the wind without sacrificing my living expense deadlines and made it there on Saturday.

I used the word nervous a lot to describe actually getting a chance to have a conversation with Toy on Elm Street Radio and then meeting her in person not long after. But that isn't quite the right word. When we finally made eye contact and greeted each other, something happened viscerally I didn't fully consider until I sat down with Diandra to do an interview for FredHeads. That hug Toy embraced me with gave me this feeling of family that, outside of my solid relationship with my mother, I've never experienced. And as I was talking about what it meant to finally meet her, I gave the most raw, vulnerable, and personal response ever in an interview. It was a therapeutic revelation that made the accumulation of my life and the weight of that day much clearer. 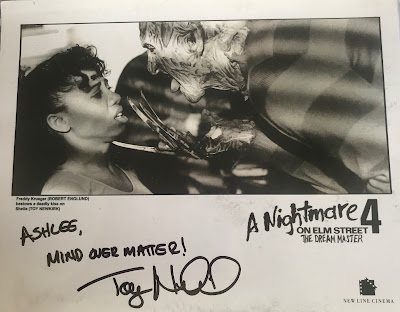 When I first saw Toy Newkirk in a Nightmare 4 as a kid, I was happy to feel less lonely. When I first realized I loved horror movies and people didn't quite embrace that part of who I was, Sheila was a reminder of why I didn't have to be ashamed of that love. When I first started the short-lived 'Black Girl Nerd' series on my own blog before Graveyard Shift Sisters was even an idea, Sheila was the muse that carried into much of my expeditions into what representation meant for Black women on screen and in horror in particular.

Toy and I have already made plans to stay in touch. Diandra, Anthony Brownlee, and the rest of the FredHeads crew members will always be a part of my loving and supportive network that I will extend a hand to whenever its needed. Being a part of the horror fan community is this exciting pocket of the unexpected. Many of us thrive on building meaningful connections that run deep because horror is so maligned. In this egregious, post-horror/elevated genre film buzz term hive to again, discredit the genre's evergreen intelligence, we're still battling misconceptions and continuously asked; why horror? When we're able to meet each other in a space that embraces our brand of choice and spend a weekend socializing, it makes the shyest of us lively and engaged with strangers whom we're just as strange as.

The horror fan community is one of the most beautiful things to ever happen to me. And finally meeting 'that girl who looks just like me', was magic.